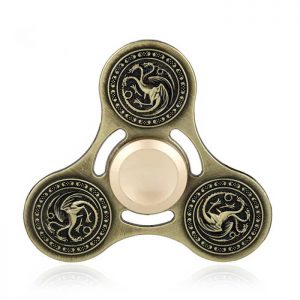 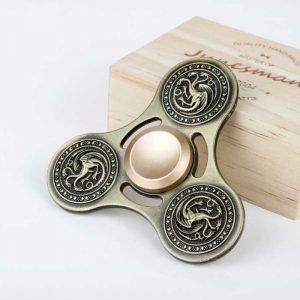 Every time a Targaryen is born the gods flip a coin. And thats how the Game Of Thrones House Targaryen Fidget Spinner came into existence.

Game Of Thrones House Targaryen Fidget Spinner – House Targaryen is a former Great House of Westeros and was the ruling royal House of the Seven Kingdoms for three centuries since it conquered and unified the realm, before it was deposed during Robert’s Rebellion and House Baratheon replaced it as the new royal House. The few surviving Targaryens fled into exile to the Free Cities of Essos across the Narrow Sea. Currently based on Dragonstone off of the eastern coast of Westeros, House Targaryen seeks to retake the Seven Kingdoms from House Lannister, who formally replaced House Baratheon as the royal House following the destruction of the Great Sept of Baelor.

House Targaryen’s sigil is a three-headed red dragon on a black background, and their words are “Fire and Blood”.